When thinking of the Southeast Asia real estate market, most non-residents might envision adventures of trying out a nomadic lifestyle. It’s cheap, it’s warm, it’s easy to get to. It seems like a lot of fun. But what many people don’t consider is, that it’s more than just a place to hang out short term. What many people start to discover is, that it’s actually a great place to live in as well as to invest in real estate. Singapore, for example, is not only a famous vacation spot but also a popular living destination among people from the UK, with around 50,000 British ex-pats currently living there. 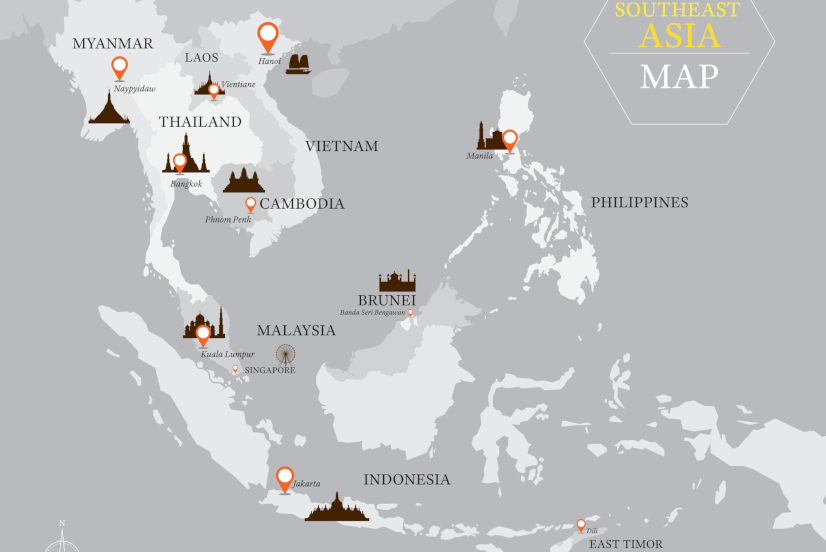 A long-time overlooked area of Asia, the Southeast regions are increasingly raising their standard of living, their financial purchasing power and their involvement in global politics. How did they do it? Amongst other things, market experts think that it has certainly to do with the rise of another Asian country: China.

The political and economic relationship between China and Southeast Asia is clearly complex. And while some, particularly in the West, would see the ascent of China to Superpower Status as a threat, many in Southeast Asia see China as an ally for economic growth.

China possesses more than half of the world’s manufacturing capacity for electronics, with a supply chain extending across Asia. With its domestic market peaking and a long-term economic competition with the United States, global companies are making strategic moves to counteract their high dependency on cheap Chinese labor, by relocating low-end manufacturing investments outside China into parts of Southeast Asia. Japanese motor suppliers, Nidec and Panasonic, have also shifted production from China to Thailand and other countries. Even Apple Inc. announced in December that it will begin assembling its top-end iPhones in India.

Even South Korea makes efforts to diversify its trade relationships to the Southeast regions and lessen its economic dependence on China. Seoul aims to negotiate bilateral free trade deals with the Philippines, Indonesia, and Malaysia. Of course, some countries will benefit more than others, but the expansion caused by manufacturing investments will generally be felt across the region.

As China slowly moved away from a low-wage economy, the economies of Southeast Asia started to emerge as magnets for global investors and manufacturers. As this momentum continues to evolve, Southeast Asia is surely becoming a top destination for investors seeking industrial real estate properties with lower-wage manufacturing labor to obtain higher returns on investments, and opportunities to profit from the region’s decent-sized and fast-growing domestic markets. Certainly, this surge, caused by the ongoing trade war, will in the long-term be unevenly distributed among Southeast Asian countries. In the short-term, however, Southeast Asia’s emerging economies will all have to contend with the supply chain disruptions caused by the U.S.-Chinese trade war. 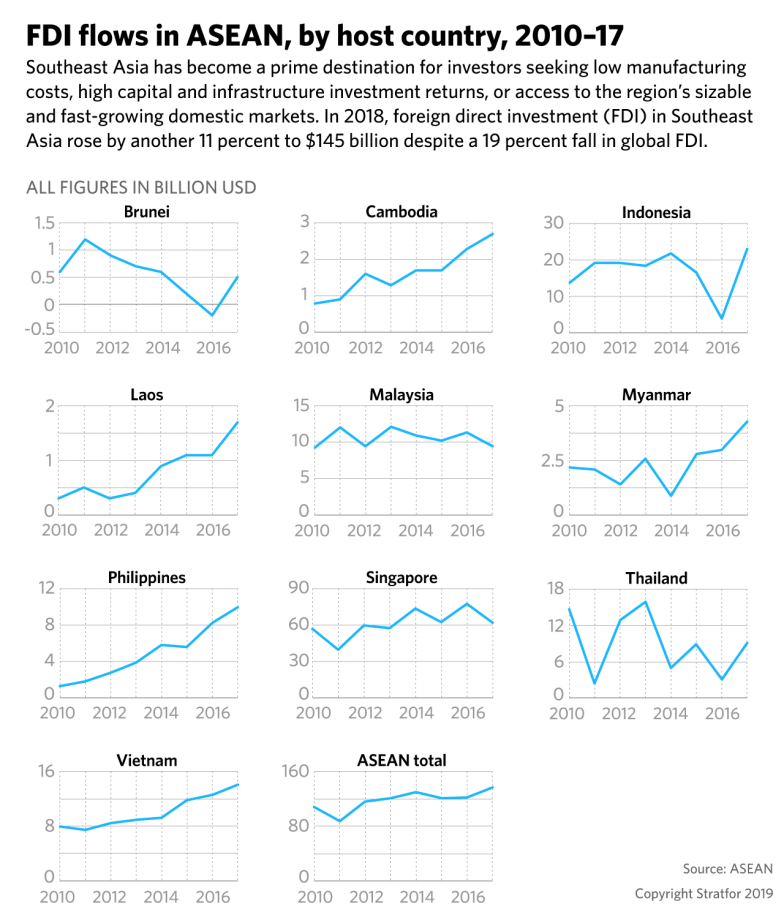 With strong numbers like these the rising economy helps raise the purchasing power of the whole region, most importantly the middle-class, and equally ensure a growing real estate market.

In 2018, foreign investments into Vietnam’s manufacturing and processing sectors increased by close to 9%. Singapore and Indonesia largely profited from tech-related investments. Investment in Indonesia’s e-commerce and digital economies made up 15% to 20% of its total foreign direct investment, using Singapore as an investment gateway into other regions. Manufacturing investments also seeped through substantially into the economies of Thailand, Malaysia, and the Philippines.

This boost to Southeast Asia’s economy certainly benefited the regions’ real estate market. Financial and real estate investment in Cambodia rose by about 20%. Together with Myanmar, these developing economies continued to experience an increase in overall investment into a wide range of manufacturing sectors.

WHICH ASSETS ARE RISING IN SOUTHEAST ASIA’S REAL ESTATE MARKET?

Besides investments in manufacturing plants, Southeast Asia’s increasing urban population has seen a growing demand for alternative residential arrangements such as student accommodation, co-living, multi-family, nursing homes, and aged care. For investors, these living sectors offer attractive yields and long-term growth prospects as well as an opportunity for portfolio diversification.

“These new sectors are set to outperform traditional residential assets given their efficient use of space, superior building management, and generally higher entry yields,” explains Mr. Crow. “Aged care, for instance, offers returns of 11 to 14 percent in Tokyo, and 8 to 12 percent in Singapore.” Hotel room investments also offer a good guaranteed rental investment of 6 to 10% P.A paired with a buyback option.

Supported by the increase in the region’s elderly population and higher health insurance coverage, the biggest increase in interest was in specialty asset classes such as retirement living, senior housing, and healthcare.

The rise of co-working spaces

The real estate market seems to have a stronger interest in the office sector and weaker demand for hotels. The Bangkok Post even dared to call it “unstoppable”. Stronger demand for offices reflects the sector’s solid liquidity and easier management compared to other sectors. Although, this is not a country-specific trend but rather a global one.

Businesses are increasingly using shared workspaces as a way to foster innovation among employees and find talented people. This has led to an uptick in flexible offices across the region.

By 2030, flexible workspaces could comprise 30% of some corporate commercial property portfolios worldwide. This means that market consolidation will become more common – landlords and developers will start to create their own flexible space offerings, form joint ventures with co-working providers, or look at mergers and acquisitions among co-working brands. 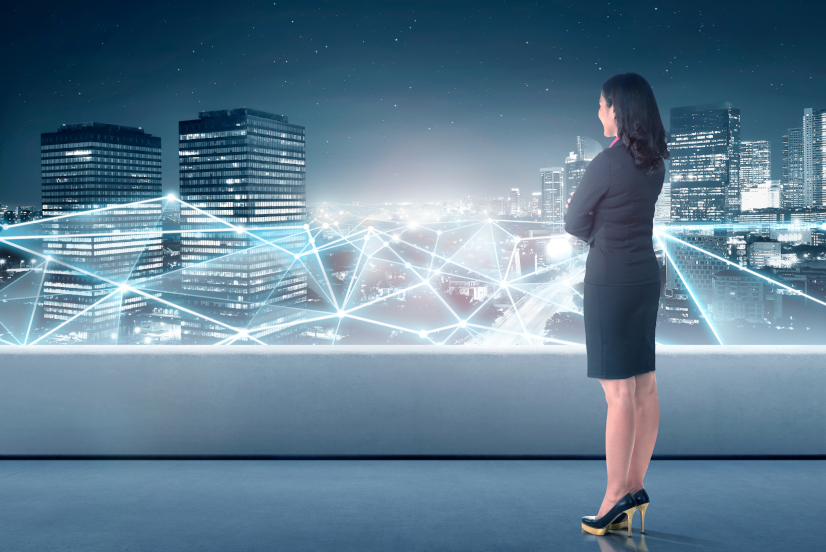 For a city to raise its quality of living and become a smart city it has to first find ways to minimize crime and uplift communities. Singapore found a great way to successfully tackle this problem by focusing its efforts on public housing to eventually help 90% of households to own their homes and fix their housing problem. Public housing areas are often considered to be low in quality and high in crime. But it is a totally different story in Singapore. The government built buildings that are clean, safe and well maintained. And about 80% of Singapore Households live in them. By focusing on these areas Singapore is one of a few countries to achieve almost full homeownership status. Their overall approach helped nurture and lift up the now affluent middle-class and eventually stabilize the real estate market.

By raising their standard of living over the past decades, the Southeast Asian regions ensured the basis for a go at building smart cities. With initiatives pushing ahead in Singapore, Manila, and Bangkok, the region is experiencing an increasing need to build better digital infrastructures to maximize efficiency, sustainability and further improve the living conditions for inhabitants.

The Philippines are certainly pushing hard towards building a smart city. With their mega project “The New Manila Bay – City of Pearls” they are aiming to become the world’s biggest smart city and are even building it from scratch on reclaimed land. The 407-hectare City of Pearl will comprise of High-end office buildings, educational buildings, leisure areas, tourist attractions, sports facilities, exhibition venues, and multi-use residential areas. One major highlight will be an advanced driverless railway system circulating throughout the entire district. Water taxis will connect the north and south islands to other districts in Manila. The entire city is expected to be completed by 2035.

To Fifth Wall Ventures, a Los Angeles-based venture capital firm, the PropTech space is worth spending on. Specifically, US$503 million worth, which will be invested in a property technology fund on start-ups in Asia. One of those Asian investors in the new fund include Singapore’s Keppel Corp and is a great sign of the increasing strength of Southeast Asian cities. Other parts of the fund will go towards start-ups in Asia with technologies involving artificial intelligence or robotics for smart buildings, as well as concepts that leverage blockchain technology for applications in real estate. Other promising investments are expenditures towards micro-mobility for smart cities, energy efficiency solutions, and technologies related to the construction industry.

In real estate, the opportunity set in Asia’s start-ups and tech ecosystem is less mature than the US. But given the scale and size of the Southeast Asian economies and its real estate industry, the PropTech ecosystem is full of potential.

If you are considering entering or investing in Southeast Asia real estate market, Contact us for a free consultation.

I WANT TO KNOW MORE!